The Eastin Hotel Penang has always being part of the community to share their success with the less fortunate and this time they would be holding a charity dinner entitled “Don’t Just Play Play, Give Away Also” in aid of the Tun Sardon Foundation (Yayasan Tun Sardon). Of course, the main highlight of the night would be the 45 minutes hilarious performance by the award winning sitcom actor Gurmit Singh aka Phua Chu Kang, a popular and iconic contractor from Singapore. The charity dinner will be held on 23 April 2012, Monday, 6.30 pm at Eastin Hotel Penang at RM300 per pax. The nett proceeds from the show will be donated to the Tun Sardon Foundation where they would redirect the funds to the necessary beneficiaries. The Tun Sardon Foundation is founded by the late Penang Governor, YAB Tun Datuk Haji Sardon bin Haji Jubir in 13 June 1978. The objectives of the foundation is to give relief to the poor and needy, in particular the widows and orphans, victims of fire, floods, famine or other calamities and to those in need of moral or social rehabilitation or welfare. Present for the press conference were Mr. Andrew Koay, Honorary Secretary of Tun Sardon Foundation and Mr. Cheah Phee Guan, Honorary Treasurer of Penang Cheshire Home, together with the General Manager of Eastin Hotel Penang, Ms. Mary Ann Harris. The event will begin with an entertaining drum performance, a string quartet by Digital Music, games session with Ah Beng and King Kong, lucky draw prizes such as a 4D3N cruise to Phuket and Krabi on board Superstar Libra, Venessa Diamonds pearls and Danai Spa treatment vouchers, followed by a grand performance by none other than the multi-faceted comedian, singer and actor, Mr Gurmit Singh aka Phua Chu Kang. The set dinner menu for the night would include:

(For Vegetarians):
Vegetarian Saffron Ravioli with Asparagus and Portobello Mushroom

Thanks to the Eastin Hotel Penang team who had put in the extra effort to fly in Gurmit Singh for a great experience for Penangites and at the same time make the lives of the less fortunate more bearable through this charity event. A job well done! 🙂 Eastin Hotel, Penang is located just next to Queensbay Mall. If you are coming from Georgetown towards Bayan Lepas Free Trade Zone via Bayan Lepas Expressway, do watch out for the Pulau Jerejak signboard (leading to Pulau Jerejak jetty). Ignore the turning and drive on to the next left junction. Turn left into Jalan Aziz Ibrahim and drive on until you a roundabout. Turn 3 o’ clock and drive on until you see a big Eastin Hotel signboard at the first right junction. Turn right and drive on. Park your car at the basement car park. Take a lift to the third floor and you would see the Grand Ballroom where the charity event would be held. 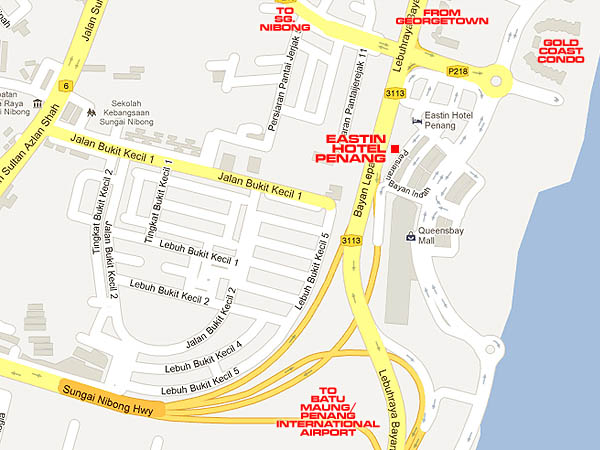